Touch Me - Any Color Black The debut EP Touch Me by Glasgow duo Any Color Black opens with the sexy-to-the-point-of-distaste, or possibly even sin, title track. The song starts with singer Louise's orgasmic moaning and breathy gasps, which are incorporated into the backing track of the song itself when they are mixed with a digital bassline and MIDI drums. The lyrics are highly sexually charged are guaranteed to get the red-blooded male listeners' red blood rushing away from their head.

Guitarist/producer Andy combines these gritty synthesised rhythm section with overdriven electric guitars that emit a tunefully cacophonic wall of sound when the song reaches its peak.

This trend continues in the following tracks As You Are. As You Were, from which the band's name comes, and the heavy-disco If I Could, with the lyrics slipping away from raw sexual urges to a more emotive expression of a girl who wears her heart on her sleeve, punctuated all the way by crispy digital sounds and heavy bass. The overall sound is very full, with made-for-surround-sound left and right panning and some effort has been put into filling those empty frequencies when needed.

As seems to be the style for most of these songs, How You Have Fun scans like a triangle pointed upwards, with the sound building up, guitars getting louder and more full as the song goes on, until Louise's voice is screaming to be heard over the swelling backing track, and then gradually elements are removed until the song returns to the bare bones it had began with. As the song builds up, the single repeated lyric "You don't know that you're beautiful" is sung with a varnish of desperation and jealousy, allowing for a plethora of different interpretations.

The lyrical circle is completed with closer Hot, a cheeky tale of a disappointing lover with a stomping drum beat.

Myke Hall
Posted by edRock.net at 22:53 No comments:

There's a reason musicians are the way musicians are. Not everyone has the confidence or the desire to stand up in front of a crowd of onlookers and have everyone stare at you while you do your best to both display a talent and express an artistic work at the same time. It takes a certain personality trait. For some, its attention-seeking. A boisterous, "look at me, look at me!" attitude. For some its a strong desire to get a message across, whether its political or personal, they have something to say and want to be heard. For some, it could be a subconscious manifestation of a dark, self-loathing desire to be humiliated and embarrassed, like a hand-glider with a secret deathwish.

, it's quite possible they're just plain nuts.


At least that's what their stage show would have us think. Nearing the end of their UK tour in support of Hundred Reasons


In actuality, the Birmingham three-piece Johnny Foreigner put a lot of energy into their performance, which isn't too surprising considering the velocity and sense of hyperactivity that surrounds their music. The yelped lyrics from the guitarist are difficult to make out, amid bleeding speedy guitar licks reminiscent of early The Cribs and thumping bottom-heavy bass. The drummer has a stripped back kit, without many toms or cymbals, giving him room to tape a synthesizer to the bass drum to play during the (admittedly few and far between) quiet moments in the set.

All three are singers, but the bassist's softer, more melodic voice works well in contrast to the raw music, a juxtaposition that works well for The Subways, a fellow indie-punk three piece.

It would probably be insulting to call Hundred Reasons emo. For a start, they've been around long enough to see the birth of that scene and have made the decision to side-step any associations, and secondly, just because partially-melodic hardcore punk is mixed with pop-punk hooks and emotionally charged lyrics doesn't necessarily mean emo. You have to wear the clothes too.


The five piece played for a good 45 or 50 minutes with barely a pause for breath, squeezing in as many tunes as possible. This was obviously a boon to the die-hard fans, but to the rest of us, it was a bit too much, and not a good enough excuse to leave out interacting with the audience. The lead guitarist had some brilliant solo skills, and the bands tunes did sway as far as anthemic Aerosmith stadium rock to punky Hoobastank needling, but much of their tunes sounded very alike, and the long set simply showed up their lack of variety.


If Johnny Foreigner are a reinvention of The Cribs or The Subways, Hundred Reasons are a recreation of Lostprophets, but with a little bit less sing-a-longability.


The highlight of the set was the epic Falter, if they had just played 25 mins of their best tunes, this would have been a much more agreeable set. 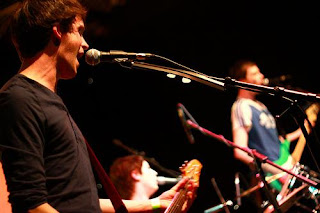 The Little Kicks are a four-piece portraying some pretty, indie feeling-sharing. The lyrics, while never really saying much, are not dull or embarrassing. The boys play mid-pace to fast chirpy, chiming tunes, with a faint taste of that folksy indie made famous by bands like Belle and Sebastian and Alfie in there somewhere too, embodying the spirit of skinny indie kids everywhere. The high-hat beats on the drums would make any disco fans smile knowingly. The musicianship in general is streamline and at times tunefully angular and the lads have a charming swagger that is pleasant to watch. The lead singer/guitarist also seems to take great pleasure from playing a few chords on the MicroKORG synthesizer and fiddling with the resonance control.

Perhaps not quite as plain as vanilla, these guys are probably more like strawberry ice cream. Sweet, but fans of Rum and Raisin or Rocky Road, they're not going to entice you. They are the sort of band you could bring home to your mum.

As rare as it is to find a girl drummer, it must be rarer still to find one that does lead vocals. But Sarah Tanat Jones' positioning is far from the only thing that makes Come On Gang (pictured) interesting. Having just returned from SXSW festival in Texas, and not afraid to chat about it, all three members of the band were comfortable on the mic, engaging the audience with a bit of banter, anecdotes, cheap jokes. Sarah's voice is very folky, which creates an interesting juxtaposition when placed next to the dance-tempo rocky music the lads play. Guitarist Mikey Morrison plays chiming treble riffs and overdriven power chords and bassist Trev Courtney dominates the low end with a full-sounding slightly distorted heavy bassline. Its difficult not to start dancing to this music.

The highlight of the set is 'Both Ends Burning', a punky rock-out with an incredibly catchy chorus, which is on the T Break 2008 CD, that you can get free from HMV on Princes Street.

Myke Hall
Posted by edRock.net at 06:06 No comments: