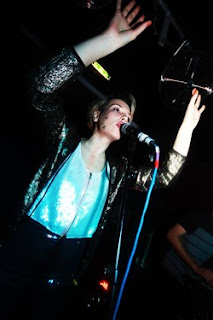 The show opened with Leith based outfit My Tiny Robots, appropriate to the electro-disco genre of the other bands in name alone. The band gave a rather awkward and self-conscious performance, switching between instruments at every opportunity: including guitars, bass, synth, drums, trumpet, melodica, maracas and ukulele. Unfortunately they seemed to think a variety in instrumentation could make up for their lack of performance skills. Only their lead singer had the charm and charisma to warrant the audience’s attention.

Conversely, every member of Glasgow four-piece Boycotts was a well oiled indie-disco machine. The female vocals had the toughness of alternative rock, without being angry or angsty, and were backed by very snappy high-hat beats on the drums, overdriven, fidgety guitar, and disco-funk rhythms on the bass. The songs are designed to get the heart pumping and the foot tapping, and succeeded.

By the time London based Chew Lips

(picture by Edmund Fraser) came on stage, Edinburgh’s smallest venue was packed sardine-style. The band is made up of lead singer girl, Tigs, centre stage, flanked by her two musical lads: Will Sanderson and James Watkins. The drums and most of the bass is pre-programmed and sequenced. The boys play synthesisers most of the set, sounding very 8-bit and glitchy, but will sometimes pick up a guitar or bass to add some buzz. Tigs’s vocal parts are poppy like Little Boots or recent Kylie Minogue.

More than any other instrument, the use of drums can affect the on-stage energy of a band, and although programmed drums blend well with synthetic music, the atmosphere ultimately suffers without having someone banging the kit. Fortunately, that’s the only area where the band lacked energy. The singer skipped happily to cyber-bleeps, while the boys convulsed to the beat like they were receiving very well timed miniature electric shocks.

The stand-out song from the set was ‘Salt Air

’, whose uplifting melody is a refreshing in contrast to the dance-punk claustrophobia of the rest of the set.