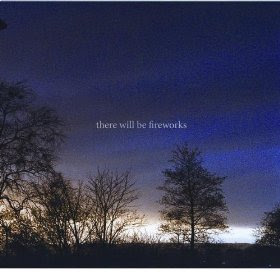 There’s definitely a theme here: 'Columbian Fireworks', 'I Like The Lights', 'Guising', 'We Sleep Through The Bombs', 'Headlights', 'We Were A Roman Candle', There Will Be Fireworks.

by There Will Be Fireworks is undoubtedly themed. The four Glaswegian musicians make use of broad Scottish accents, which go from hushed harmonies to desperate screams as the dynamics of the songs rise into the air and then fall back down in an explosion of sound and colour (see what I did there?). The delicacy and understated-ness of certain sections of this album are hard to ignore, with some very moving piano or acoustic guitar, streaking into overdriven or delayed guitars, Arcade Fire-y crashing drums, and insistent bass.

The flow of the album is also carefully crafted. The songs contentedly and calmly collide into each other, as if written purely for album release, giving the impression of an epic rock opera. Beginning with the spoken word poetry of Colombian Fireworks

, softer slowburners So The Story Goes

to the epic yell-along Off With Their Heads

, an unforgettable tune that is the highlight of the album, and onwards through an anthology of other songs, no two sound quite the same.

, where it dances (waltzes even) underneath flute flutters and oboe sounds and drums played with beaters rather than sticks, while at other points it happily undercarries the excited strobe light guitar.

Unfortunately, the second half of the album does not maintain the rocket-high quality of the first half, with the whiney lead guitar riffs and strained vocals beginning to annoy the ear. But this is still an excellent example of how an album should be written. Recurring themes in both lyrics and music, variety of instrumentation and arrangement, but all tied together with similar production. Each song easily snaps onto the last and the next to create a complete piece, as well as a collection of individual tracks.

Also, try not to be holding any hot drinks when you listen to We Were A Roman Candle

; you might get a fright when the loud part kicks in.