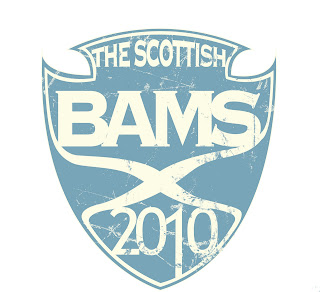 edRock.net is proud to have participated in the 2010 Scottish Blog And Music Site award (BAMS), where bloggers, contributors and webmasters vote for their favourite albums of the year. The BAMS award is coordinated by Lloyd Meredith of the notable Scottish music blog Peenko. The top fifteen albums of 2010, as voted by Scotland’s online reviewers, are:
The top 30 are available from the Peenko blog and the logo was designed by Struan Teague.

Privilege Promotions have organised an acoustic gig at Wee Red Bar on Fri 28th Jan 2011. The gig will be free entry and include acoustic performances from Ratson, The Aspect, Jason Kyrone, Paul Harthill, Sweep Across Horizons and My Electric Love Affair.

Edinburgh businessman Keith Easton and his company Identity Parade Arts Limited are “well underway” with plans to open a new “creative hub” in Edinburgh, combining a rehearsal space, recording studio, café/bar, photography studio, music shop and a CD duplication and printing facility into one convenient location. Easton said “having lived in ‘The Festival City’ of Edinburgh all my life, I want to create a facility that will complement the vibrant and eclectic social scene of Scotland’s Capital City.” The company is working with the Edinburgh Chamber of Commerce and approaching Voluntary Arts Scotland, Creative Scotland and The Cultural Enterprise Office to help with funding. For more information or to offer advice for funding options visit Identity Parade Arts.

The newly formed Olive Grove Records have announced the release of the debut album by The Son(s). The Sons were a three piece band from Edinburgh, who split up and moved to different places. The Son(s) – with added parentheses, is the recording name of the band’s one remaining member, Karl, who now lives in the North East of Scotland. The self-titled album will be available from 7th March 2011 on CD and for download. The debut single ‘Radar’ is available now on iTunes, and the lead track ‘Dogs, Boys & Men’ is available for free download via Bandcamp.

will soon be releasing a new EP, and are asking their fans to decide which song from their debut album Eleven Return & Revert

to remix for the album. You can vote in their online poll or leave a comment on their Facebook page. Voters will also be submitted into a prize draw to win a Midas Fall t-shirt.