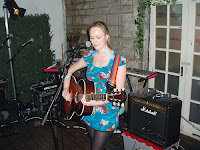 No one would blame you for assuming that the first Edinburgh Twestival (that's "Twitter festival") was a total geekfest. And in some ways it was. The members of the audience in the gazebo out the back of The Hawke and Hunter were able to hunch over their Iphones, Blackberrys and notebook laptops and tweet their opinion of the gig while it was going on, which was then projected onto a screen at the front. Gimmicky, huh? Well, the novelty was fun.

Peter Gregson played the pretty darn original set-up of electric cello and laptop samples, and I don't think I was the only person in the room wondering why no one has thought of this before. The cello makes a gorgeous sound, and the laptop's swirling digital faux-orchestration made for some absolutely breathtaking backdrops. The music, which I guess you could describe as post-rock or romantic-era orchestral, depending on your point of view, seemed part-way classical, part-way motion picture soundtrack. Heavy on the synthetic strings, Peter Gregson is at the centre of his own invisible orchestra. The final piece was credited to someone in the room, giving merit to my guess that he was mixing classic and contemporary compositions, but all in his own style.

The gorgeous Plum (pictured) and her shiny "Twitter bird" earrings, were second to bat. Another MacBook musician. Plum seemed to have two different types of tunes. Some were guitar strummed love songs, accompanied by swelling high-attack bass and synth-string noises from the laptop, which were entrancing, if a little wet. Her voice is soft and unobtrusive. Lovely background music but more tricky to grip people's attention. The others were the intriguing ones. Using a loop pedal, she records several layers of vocals over the top of each other. Starting with a repetitive bass, maybe some hand claps, then adding the vocal melody, the some haunting harmonies. The effect is like an aural kaleidoscope, with each pattern weaving and meandering smoothly into the next. While these songs lack the reality and accessibility of the guitar songs, they make up for it in creativity, and for that reason they're a treat for the ears. Plum is an innovative creature. My favourite was 'The Eagle and the Penguin'.

The final act of the night were Epic26, who opened with the new-wave/indie dancey floor-filler Loving Lucy. Heads were bopping and the chorus melody was being written into the attendee's heads. It must have been over two years ago I first heard that tune. To the best of my knowledge its the only song that's survived since then, especially with the introduction of the MicroKorgs into their line-up and, I reckon, its still the best song in their repertoire. However, they didn't get much of a chance to prove me wrong as I nipped off to the lavvie and came back to find they'd blown a fuse and all their power had gone out. After some heated exchanges and panicked motions between the band and the sound guy (JT of Live Systems - mate of mine/library monitor/one of Edinburgh's finest techies) I gave up and went for a drink upstairs. I hear they got the sound working again and played the rest of their set. I missed that, I'm afraid.