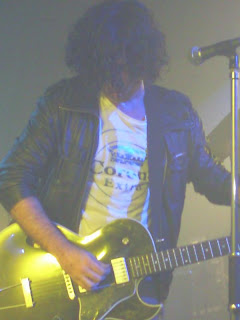 That really dry, tinny tone of electric guitar solos or riffs up on the high strings with no overdrive or distortion or other effects at all is a difficult tone to accept. It just sounds wrong. Guitar solos don't sound natural unless they're baked in an overdrive pie. Where's that raw, aggressive, masculine noise we're used to hearing guitars make?

This of course, is one of the many lines in the sand we can draw between rock and indie. The 10:04s, in sound, dress sense, and possibly even outlook on life, definitely fall into the indie category. They are not, of course, the first ones to use that particular guitar sound. Most notably The Libertines, who seem to be a big influence on this Edinburgh four-piece, have done a similar thing. One could also very easily draw parallels to The Strokes, who got famous on that constant staccato strumming rhythm guitar style, and The Fratellis, with whom they share a love of "wo-oh" and "da-dah" singalong football-chant melodies. These would be easily lines to draw. Perhaps less obvious would be the indie-boys affinity for rockabilly, as they demonstrated with a quick cover of Chuck Berry's 'You Never Can Tell', which they used to cover up some kind of equipment failure.

A lot of excitement and energy from the two guitarist/singers and the drummer, and a lot of "too cool for school" posing from the bassist, and the songs, though a good decade past being an original sound, are catchy and well-structured pieces of indie-punk.

The second band, The OK Social Club (pictured), got their new name for a live music night they used to run at The Mitre (a cookie for anyone that can tell me the 80s classic that inspired the name The 10:04s). The band formerly known as Kiddo are a well-oiled gigging machine. The whole band played with a tremendous vigour. Rocking out and making it look easy. The bassist, though, convulsed, headbanged and stomped his way through the songs like he was possessed by the devil. In fact take away the chequed shirt and trendy shoes and replace them with a loose black t-shirt and boots and this guy would look right at home in a metalcore band.

Still, flawless basslines, and superb vocals from Raff, who also performs his solo acoustic stuff on the Edinburgh circuit. The music is what people like to call pop-rock. The punch of heavy guitars and powerful rhythm section, mixed with the catchiness and charisma of pop music. Raff successfully treaded the thin line of working the crowd, pleasing the current fans and cocky showing off. I've seen these guys cross the line and fall short, but this time I think they hit the mark.

Having no more songs left for an encore, the band reprised the chorus and outro of one of their catchiest tunes. The ease with which this was managed, even after a stage invasion, is testament to their hard-earned performance experience.