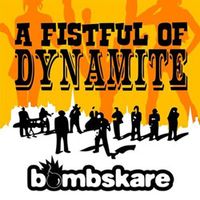 Bombskare have been piecing this album together down at Verden Studios for the best part of four years now. But there is ten of them. So it takes a lot longer to record all the parts than it would an average-sized band and an increasingly longer time to mix them.

The album launch started with Root System, a rather aggressive sounding four-piece playing a mix of roots ska and punk. Good performers on stage, the lead singer did some Jamaica-style rapping in his low Scots voice, while the guitar was mostly distorted upstrokes. A bouncier bass and some brass would have brightened them up a bit, but maybe that's not what they are going for. A couple of songs in, they proclaimed: "The next song is a slow song. Just kidding! It's fast as f***! Slow songs are for gimps!"

The Amphetemeanies are the Glaswegian Bombskare. The full-size nine-piece includes guitars, bass and drums, male and female lead vocals, a brass section and Hammond organ. While they don't quite have the stage presence or the tunes to match their Edinburgh counterpart, they are far from shambolic, and pumped out the two-tone tunes with a terrific tenacity. Special mention should be made of the organ player, who was brilliant, and the trumpeter, who also plays in Belle and Sebastian. He does that haunting solo at the end of ‘Like Dylan in the Movies’. It’s also impressive watching the massive, bald, shades-wearing frontman destroy an eight-pack of beer during the set, and his tiny-in-comparison Blondie-t-shirt-wearing female equivalent, who danced her socks off despite a leg injury.

Big Hand were, in my opinion, the highlight of the night. The fact that there are only 4 of them, bass, guitar drums and trumpet, does not draw away from them sounding quintessentially ska. Quirky without being kooky, two-tone without being too non-mainstream, stylised but still catchy. With chant-along-chorus' and a high performance energy all round. The sweaty but untiring crowd responded to the presence on stage and even those who didn't know the tunes were singing along. Although the support slot set meant they missed out several fan favourite songs; ending on ‘Magnet’, their single release, followed by ‘The Man with One Big Hand’, their signature song, was an astounding conclusion to a top notch show.

The night's headline act take up a rather sizeable portion of the stage. The ten-piece Bombskare performed their act skilfully. Like many ska acts, the lyrics ranged from good natured capers to political messages, to songs not even in English. For some of their set they were joined on stage by the trumpeter from Big Hand, leaving even less of the stage free for them to move around on, but it is big stage, I've seen these guys squeeze onto the stage at Bannermans, and they seem quite content to bounce on the spot. Each song was also accompanied by a visual display projected onto either side of the stage, which coordinated nicely with their songs, especially during ‘World Turned Upside Down’, when a picture was projected of the wrongfully imprisoned Mark Barnsley, for whom the song was written. It seems that Bombskare have their sights set on Hollywood too, they've already written their own Bond song, ending triumphantly with the Bond theme, which sounds as epic coming from them as it does from any cinema sound system. The highlight of the set for me was ‘Crime of the Century’, which I feel would sound gorgeous with just a plucked acoustic guitar and the two singers in harmony, but got the whole crowd dancing nonetheless with a great Blues Brothers harmonica solo in the middle-eight too.

Bombskare's debut album, A Fistful of Dynamite is available on iTunes or on CD at their shows.