What You're Looking For - Little Green Machine 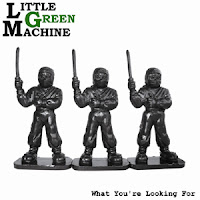 It might be a little bit odd writing about an unsigned band that have already broken up. But I really like this EP and think it deserves a bit of attention.

What You're Looking For is the second EP self-released by the Edinburgh power trio Little Green Machine. The comparison to the last one is probably clichéd but I'd say the sound is slightly more matured, less raw and more carefully produced.

Each track features incredibly clear and well separated drums, without ever letting them sound overwhelming. The guitar sound is mid-balanced and bright in the quiet bits and fuzzy and distorted in the loud bits. Lead singer/bassist Jack's voice has a post-heavy night out strain to it. The sound of the band is a mix of late 90s grunginess (Placebo, Smashing Pumpkins) and American alt-rock (Foo Fighters, Jane's Addiction).

Opening title track What You're Looking For has a bit of a punk feel, opening with drums and feedback, with a running pace beat and tempo all the way through and builds up to a chant-along chorus of "Hold on to what you love". As with a lot of songs executed by three-piece bands, the "solo" section is manipulation of chords rather than single notes, so that the song doesn't lose any energy.

Take Me By The Hand is the EP's ballad tune. With a John Frusciante Chili Peppers sound to the guitar, the song floats along. The very active drums and plentiful fills don't seem to kill the more relaxed mood of this tune.

Honey Bee is the lyrical highlight for me, blending ironically cited cliché with some inspired introspective imagery, like "you moan about the honey and you won't drink the wine". Some pretty harmonies provided (presumably) by drummer Cat. It starts by sounding kind of glitzy and disco but descends into some dark grungy chord progressions.

The ends on Jelly Baby. Very Nevermind-era Nirvana. The song includes a breakdown which is just crying out for some "get the audience clapping" sessions when they play it live. Like the rest of the album, it sticks to grunge principles. Angsty lyrics, loud in the chorus, quiet in the verse. It actually starts quite indie-folk, but when the chorus kicks in it kills off all traces of Snow Patrol.

Jesus, how many times in this article have I used the word "grunge"? I'm sorry, its currently my favourite genre. I disagree with Wikipedia's definition because there has been a lot of different bands since 1994 that use the features of grunge music and it's ridiculous to just call them all "post-grunge" because they didn't come from Seattle. If that were the way it worked we'd have been listening to "post-rock" since Please Please Me came out in 1963.

Back to the point. This EP has the right balance of rocking out and chilling out that a rock record should. Its a shame the band have broken up, but I should probably plug what they're doing now. Jack has recorded some solo stuff and has been known to play tambourine and backing vox for City City Beat. Cat has joined St Jude's Infirmary and Arthur (guitar/backing vox) ... isn't doing anything musical anymore as far I know.