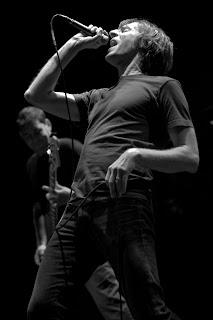 The Scottish band The Vaselines

are well known in the world of grunge, perhaps most famously because their song Jesus Wants Me for a Sunbeam

(also known as 'Jesus Doesn't Want Me for a Sunbeam') was performed by Nirvana during their 'MTV Unplugged in New York' performance. While they do seem to fit well on a grunge bill, with their DIY production style and use of overdrive, a Scottish ear hears differently. The band are more reminiscent of dreich Scots folk-indie bands like Belle and Sebastian, Arab Strap or St Jude's Infirmary - it’s a band type we are quite familiar with. The two vocalist/guitarists, Eugene and Francis, share the spotlight like a brother and sister. Gracious enough to let the other have attention, but with a natural rivalry underneath, like they are craving Mummy's attention. (In this metaphor, the crowd is Mummy). Oh, and apparently they have differing opinions on thongs 9the girl likes them, the guy doesn't). Joined by a calm bassist and a slightly more enthusiastic drummer, the band have indeed aged since their late 80s heyday, and the nine year gap in their career prior to the 2006 reunion may have sapped some of the juice out of their punk spirit, but the band still chime and thrash in equal measure and seem genuinely pleased to be playing to a crowd.

(Photo by Richard Dyson) love to rock out. Of that there can be no denying. With a buzz sound on the bass and clattering drums, the lead singer pulls his best moves on stage. There's a lot of Mick Jagger going on there, and maybe just a hint of Ian Brown. The songs are made up of fast paced distorted power riffs, and yelled choruses. However, it’s not until the singer straps on a guitar that things really start to heat up. The lyrics are all things the previously-disillusioned former-youth audience should be familiar with, but may be new to the post-emo young of today: confusion, sexual frustration and sickness. Never is this more exemplified that in the fan favourite Touch Me I'm Sick

, which the band recently told The Skinny would be great for a drain cleaner commercial.

While some argue that grunge music is no longer culturally or musically relevant, a resurgance of interest in bands like The Melvins, Alice in Chains, and Mudhoney themselves seems to suggest otherwise. Either way, it’s great to see one of the original Seattle sound grunge bands live and on form.