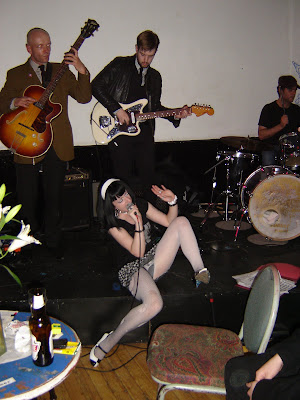 Beginning at the beginning: the Forest Cafe is as usual abuzz with the chattering of the 21st century version of beatniks. People are reading, drinking herbal drinks, eating vegan snacks, sitting on damaged mismatched donated furniture, under hand-decorated walls, house-plants and candles in bottles. A documentary on the Riot Grrl movement is being projected against one wall, but all that can be heard is a mumble. There are maybe two people watching it.

What follows is a series of female hippy guitar and poetry recitals. There's possibly a loose theme of anti-sexism and 'Dear Diary' emotional confessionism. The compère, dressed in punk leather and metal, introduces her own band next. This is their maiden performance, and they sprint through one three chord song with angry Italian lyrics, to a tremendous ovation from an audience that are likely high.

The star of the show, of course, was vikisellotape, and her band s/e/l/l/o/t/a/p/e. Drunk to the point where she could barely stand up, Viki squeezed onto the tiny stage that her other band members had filled up. Sellotape belong to that odd genre "no wave", which uses artiness from bands like The Velvet Underground as the template for lo-fi tunes involving noise, dissonance, broken tempos and non-rhyming phrases. Often they sound improvised, and usually they sound chaotic, which is why it's oh-so-interesting when the band change gears on a penny, be it in tempo or dynamic, and prove that this is exactly how it's supposed to sound.

Guitar is provided by former The Dreamt frontman Andrew R. Hill, who kept the strings glittering through new wave riffs and shoegazing noise, despite a drunken Viki stumbling all over his pedals and kicking out his leads. Bass was equally well executed, whether it was bouncy ska-style riffs or just one single repeating heartbeat note. In fact, the drums were often the only instrument that felt like they were playing the song, and the other instruments created planned chaos around them.

The eye, however, cannot help but be drawn to Viki. Dressed in all black and white, from her white hairband to her chequered short skirt to her two-tone heels, with black makeup and black writing up her arms; whether she's screaming into her mic, like a toddler having a fit, then writhing on the floor like she's in sexual ecstasy, or crawling around like Velma looking for her glasses; Viki is definitely an entertainer, and the booze lowering her inhibitions was like throwing petrol on a tyre fire.

Her occasional bursts of synthesizer couldn't really be heard in this venue of fifth-hand equipment, but it was probably just as well, as she might not have been able to see the keys. The lyrics explore such Kafka-esque concepts as cutting off, then reattatched a mammary gland on 'My Left Tit' and curbing instability and violent thoughts on 'Plastic Bag'.

In many ways, this was the best environment to experience Sellotape. The ludicrous melting pot of alternative cultures, the extensive inebriation of the frontgirl, a tattered drum kit and PA on their very last legs, they all amplified the extroverted entropy that the songs expose.