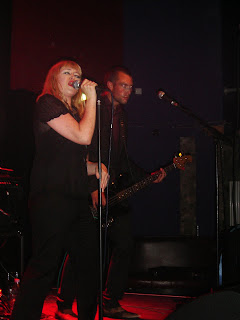 The Bang Bang Club is a late night music club running in one of Teviot House's dungeons as part of the Fringe. Rather than a support band, vikisellotape, of sellotape, brought us a great DJ set featuring synth pop and the darker side of new wave. For one of the songs the girl herself came down to the dancefloor, unashamedly dancing in an almost robotic fashion in a room full of knackered Fringe goers and 90s rockers to Gloria Jones' 'Tainted Love'. The entire room was transfixed on her subtle stepping movements and her goth meets two-tone outfit.

While Isa and the Filthy Tongues origin is in Edinburgh, their music certainly isn't. Their slick, smooth grunge is rooted in the Seattle sound with the sleek shroud of LA magic ("they like it with a lot of flash, but its still that same old back street rhythm that really really kicks 'em in the..."). The smooth but dark rock is comparable to the Breeders and Joy Division. The Oregon-born lead singer is a slightly less punky Courtney Love, and the backing band are well versed in making their instruments sound simultaneously noisy and controlled.

After an instrumental introduction, the singer arrives onstage, her blonde hair a contrast to the blackness of the rest of the bands clothes. The guitar riffs are showered in glittering chorus and reverb as the bass rattles along with punk bones.

Highlights of the set included the Stooges punk of 'Finders F***ckers' and the catchy pop-rock of 'Big Star'. Towards the end of their set, the band played their new single, 'New Town Killers': an anthemic gothic country track of Lydia Lunch-esque debauchery, the title taken from a Richard Jobson film of the same name.

The performance was rousing, despite it being the graveyard hour, and by the end of the set a good few of the bleary eyed punters were dancing to the beat.
Posted by edRock.net at 10:57