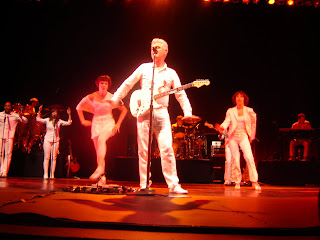 So, a live show from David Byrne

. Between his solo stuff and and Talking Heads back catalogue, there's enough variety in music that you'd expect a big band. Although Byrne is the only guitar, there's bass, drums, and some additional percussion. He's not known for stunning vocals so much as innovative songwriting, so some back-up singers, check. The tour is called "Songs of David Byrne and Brian Eno" so we're gonna have to have a really good keyboard player with all sorts of different sounds to replicate all of Eno's ingenuity. And Byrne is a little eccentric so lets figure he dressed them all in pure white (to match his hair). What else is there? Hmm.... how about three choreographed backing dancers that look like they're fresh out of 'Fame'?

As unexpected as this choice was, it definitely worked. Byrne was able to punctuate each song differently. Some were straight up jams with the band in full swing. Some had choreographed routines, crazy lights and projected backdrops. And it meant there was spare bodies around the stage when they needed people to play hand shakers or strum an acoustic guitar. The band used no amps (except for the bass) and only in-ear monitors meaning, like a musical, there was more space on the stage for the dancers to play with, and less stuff for them to trip over. David Byrne played the ringmaster in a circus of on-stage activity, putting the entertainment value high above other early 80s stars touring their back catalogue to the 35+ market.

The music played in the set is drawn only from David Byrne songs where Brain Eno was involved. So that's three Talking Heads albums, two David Byrne albums, and a handful of other tracks. The material ranged from ethereal cosmic jams, quirky pop tunes, heavily rhythmed world influenced indie and rocking new wave.

While usually the 57 year old from Dunbarton seemed in full control, even joining in with the dance routines sometimes, like when the dancers all came on with guitars that looked like his and danced in a diamond shape, there was one moment that betrayed the man's cool. You wouldn't expect a musician of his experience to struggle so much with a guitar that wasn't tuned properly. About 45 seconds passed as the band waited patiently and the heckles started. A helpful roadie came on offering a replacement guitar, he refused at first but gave in to the pressure. It was a distracting moment, and it shattered the illusion of perfect control he had created by a meticulously rehearsed and choreographed show. We saw the man behind the curtain.

As fans of his may expect, however, he made up for the blunder ten-fold. He deserved at least two of the three encores he played (which were really more like curtain calls, the amount of production that went into this Playhouse performance) and the crowd were delighted when he broke his "Byrne/Eno songs only" rule to play the Talking Heads classic Burning Down The House

, while he and the band wore white skirts and tutus.*

Myke Hall
*Seriously, I have pictures if you don't believe me.
Posted by edRock.net at 10:06