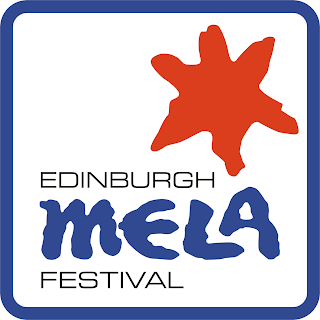 'Mela' is actually the Sanskrit word for gathering. Its the word used on the Indian subcontinent for, what we would call, a country fair. A Mela in this country is both a subcontinent style country fair and a celebration of cultural diversity. The Edinburgh Mela, an annual event founded in 1995, is taking place at Pilrig Park this year from Friday 7th Aug to Sunday 9th Aug. There's music, dance, other performances, food, crafts and workshops.

Here's some details from Mela Director Liam Sinclair; “This year’s Edinburgh Mela promises a host of new performances. We have an even bigger big top which has increased the scope for performers and audiences. Once again we have acts coming to perform from overseas, but also performers who are UK-based but whose roots lie elsewhere. This year there are also a number of performances and artists that are working cross-culturally, often with exciting and surprising results.

“Among these is Yatra who are back with a performance that builds on their world premiere last year with the addition of a dance element provided by South Asian classical dancers from Dance-Ihayami and a film element by Krish Shrikumar. This performance is supported by the Scottish Arts Council National Lottery Fund in celebration of Homecoming 2009.


“Finally, the Mela will end on Sunday in true Scottish style with a jam session and ceilidh as musicians from a number of groups attending bring the festival to an exciting close.”

Also, this year, they've got BBC Asian Network involved, and they'll be broadcasting live from the site. You can find the full programme on the Mela site.