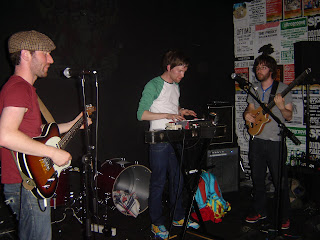 The night of electronic splendours began with Belfast-based Madchester-inspired three-piece Not Squares. It’s music not 100 miles away from what you might hear in the background of an early 90s video game. The two standing band members face each other over a deck of synthesisers, effects units, and some more gadgets that seemed as if they’d be more at home in a radio repair shop, and between them the drummer rattles the high-hat. Occasionally they chime in with some reverby indistinguishable vocals; all three members sing. Their cries echo like distant battle cries of warriors in the next valley. Maybe it’s the association with video games but the music conjures up images of vast landscapes and fantastic scenarios. In the catchier tunes, the keyboard players pick up electric bass guitars – one with a deep, rich, warmth, and the other more trebly and woody, so its higher riffs are audible over the top over the deeper basslines

The trend of two synth players facing each other was continued with fresh-faced Edinburgh duo Dead Boy Robotics. Their name is very fitting. It combines the electronic gadgetry of their synthesisers and laptop samples with the noisy guitars and metal screaming vocals, that both indulge in. The first song sees them playing guitar and bass, but as the band declare after a technical hitch “since we don’t know how to work guitars, this next one doesn’t have any”. Through the course of the set we see them play guitar and bass, their synths, or hammer aggressively on a pair of floor toms, all to backing tracks of beats and noises piped out of the laptop in the corner. The mood is much more serious than Not Squares, with a gloomy gothic moodiness hanging over their electro beats. The band themselves, seem to be a lot happier than their music, joking with each other between songs. While they may be young blood, their recent invitation to play on the T Break stage at T in the Park shows they are the new masters of the digital realm.

Headliners of the night were FOUND (pictured), who are quite the novelty themselves. Combining folk sing-a-longs with beats and beeps, the five piece are on Fence Records, the record label version of the famous Fifian Fence Collective, and represented Scotland at this year’s South by Southwest festival in Austin, Texas. However, only three of the five attended the evening’s festivities, doing their rather distinctive interpretation of a stripped-down set. The lead singer, Ziggy, played an electric guitar, backed by two other members who punctuated the songs with hand percussion, sample workstations, electric bass guitar and even a Game Boy. The songs themselves have a strong rural melody that feels like it should be backed by harps and violins. Instead, orchestra hits, 80s loops and distorted guitar riffs undercurrent the songs, creating tension, agitation and above all uniqueness. As the band were proud to admit, they’re Edinburgh natives too, and although the oddity of the group, especially in the incomplete form, may have been lost on much of the audience, they also put smiles on the faces of those of us who seek originality done well.