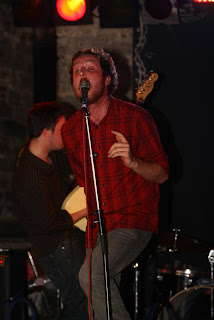 Despite the apathy of most of the crowd, the band put on an impressive stage show. Frontman Rich leapt about the stage clutching his mic stand fervently, and guitarist Andrew engaged in some rather dramatic showmanship, strumming his guitar above and behind his head at the end of the band's set. This is a band at their best on stage, not to be missed live.

Danielle Mattison
Posted by edRock.net at 03:14