Continued from The Edge Festival Line-up announcement:
24 Aug 2009: Due to circumstances beyond his control, Ian Broudie's shows at Cabaret Voltaire, which were due to take place on Tuesday 25th and Wednesday 26th August, have had to be cancelled. Full refunds are available at point of purchase.

21 July 2009: The good news: Emma Pollock confirmed as support for Andrew Bird at The Picture House on the 23rd Aug. Also Carolina Liar added at Cab Vol on the 24th.
The bad news: Múm supported by My Latest Novel has been cancelled, a casualty of the Studio 24 close. Full refunds are offered at point of purchase or the tickets will also be valid for the Glasgow gig at Oran Mor on the 15th Aug.
In other news: Boys Noize added for City Nightclub on the 27th (what?), and the Edge present a whole series of small gigs at Sneaky Pete's over the course of the month. These won't be tracked on the calender, as there's too many of them, but all the other changes have been made on the calender.

19 June 2009: Four more acts announced, including new headliners. Legendary experimental rockers Faith No More (pictured) on the 25th and Scotland’s own Biffy Clyro on the 21st, both at the Corn Exchange, and The Juan MacLean and Frank Turner at Cabaret Voltaire on August 17th and 28th respectively. The calender has been updated accordingly.
6 July 2009: N-Dubz, Ian Broudie (of Lightning Seeds), Metric, Starsailor, The Red Hot Chilli Pipers, Dinosaur Pile Up, Metric, The Living End and Jefferey Lewis added to the festival. Emiliana Torrini cancelled. Due to Studio 24 losing their license and closing (again - sadface), all Studio 24 Gigs at The Edge have been moved to HMV Picture House. The calender has again been updated. 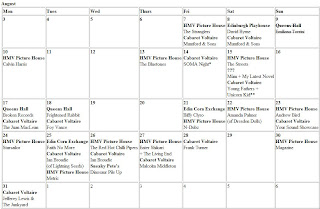 View Calender
Posted by edRock.net at 11:11