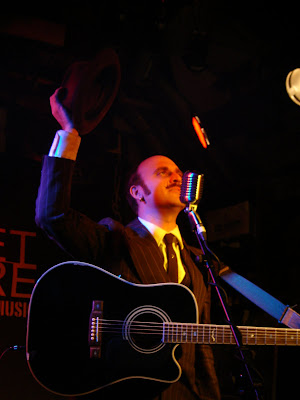 In an interview with Stereokill, Franz Nicolay

(pictured) is quoted as saying, "I think musicians had two business models for thousands of years: the Troubadour, where you had to travel from town to town and sing for your supper, or the Patron, where you courted the favour and worked at the pleasure of the idle rich."

It’s clear from his performance, if not directly from his music, that Franz Nicolay really is a man from another time. On stage he's more of a cabaret performer than a musician (appropriate considering the venue title). Between songs, he tells stories from his travels and makes jokes, smiling broadly from behind his Mario Bros moustache and his black suit and hat.

Franz’ voice is as rich as the red wine he drinks straight from the bottle, and has the air of professional vocal training. He plays some songs on the guitar, and others on the banjo, both of which he can handle with ease. Fans of The Hold Steady will know there are few instruments Franz hasn't mastered. His style can be applied to rock, folk, even ragtime tunes, but most often he employs it for stirring, inspirational ballads.

Through the content of his lyrics, it’s clear Franz has not only a fistful of life experience and a worldly view on life, but also a cultured taste. Though he appears to be a man of the past, he also seems to be able to predict the trends of the future; one of his songs references 'Nick and Nora'. It’s not clear whether that's a reference to the 1934 book The Thin Man by Dashiell Hammett, one of the six films, the TV series or the radio show that the novel spun off, the 1991 Broadway musical based on the same characters, or the novel 'Nick and Norah's Infinite Playlist' that was inspired by the characters. Whichever it was, the characters have recently been seen on cinema screens in the 2008 adaptation of 'Nick and Norah's Infinite Playlist'. So has Hollis Mason, subject of Franz's song 'The Ballad of Hollis Wadsworth Mason Junior' and narrator of the 1986 classic Alan Moore graphic novel Watchmen and the 2009 film adaptation. For a man who seems to be from the past, he certainly does seem to see into the future.

Despite appearing without his backing band of indie all-stars, Major General, the coup de grâce of an excellent solo set was his performance of the hard rocking Jeff Penalty

, a song about the now-grown-up punk scenester’s relationship with the Dead Kennedy's front man. Franz performed the song with enthusiasm, slaughtering his guitar strings and stomping his foot resoundingly on the hard wooden floor, lost in the energy of the song until about two thirds of the way through, where he embarrassingly filled a quieter bit by explaining "this is the part where there's usually a guitar solo".

There are some stark contrasts between Franz Nicolay and his touring partner, Mark Eitzel

. While the San Francisco man, formerly lead singer of American Music Club, also sports a Fedora, a suit and facial hair, their music and performance style differ greatly. Franz bubbles over with positivity, showmanship, and an entertainer's spirit. Mark Eitzel is a different breed. His is a self-deprecating dark humour, and his stories, he contends, intriguing as they may be, are situations were he was in the wrong place at the wrong time. He's almost too shy for the stage, but it would be such a shame if he didn't get up there and tell his crazy stories and sing his beautiful tunes.

Mark is an old fashioned crooner. With just a piano accompaniment, his rich, deep, somewhat throaty voice glowed like hot embers. Mark reminds us of how powerful music could still be long before rock and roll existed, and how a great singer and some piano are sometimes all you need for a moving performance.

Some of his most memorable pieces included his rendition of the classic 'I Left My Heart in San Francisco', which his style took to a dark, regretful place, and the song The Blood on My Hands

, during which he was joined on stage by Franz Nicolay for accordion and backing vocals.