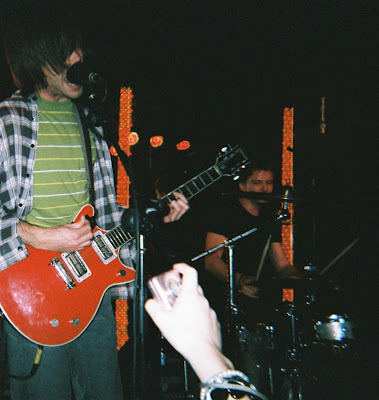 have brought intelligence to a genre that demands nothing but passion. The guitar and drums have been carefully formulated to compliment each other very well. The guitar itself is usually highly distorted, but also makes use of muting and bright picking parts in order to provide a wide variety of sounds to Sucioperro's range of tunes, meaning their sound can stretch between uplifting power rock ('Don't Change (What You Can't Understand)

'). Sometimes the use of guitar goes a step further to a level of some serious creativity; there are some very interesting sliding and harmonic sounds in 'Liquids,' for example.

The bass is strong throughout, playing root notes when required, and playing more playful riffs that parry the movements of guitar and drums when there is room to. The drums are consistently tight and snappy. The vocals do sometimes suffer from ‘Transatlantic Syndrome’, that is, a Scotsman trying to sing in the American accent of the band he's inspired by, but this is not true of every track.

On stage, the Ayr trio have no problem executing complex songs without breaking a sweat, and are watchable without being cocky.

The other comment to make about Sucioperro is their colour co-ordination. All in black and red, with armbands and crosses, matching the drum kit too. There were no such stylistic concerns when Nine Black Alps

(pictured) took to the stage.

Nine Black Alps’ first album was hailed by grunge fans for picking up where Nirvana left off. Screamed vocals, angry lyrics with dark metaphors, and chromatic overdriven major chords typified their songs, and a dishevelled, brand-free dress sense and unkempt hair characterized their image. Since then, they have expanded their sound, taking lessons from post-Seattle sound bands like The Vines and Bush.

Now on their third album, the four-piece haven't gained much in the way of commercial success. But their performance has the heart of a band playing what they love, and there is still enough of an audience there to keep them going, which is all any musician really needs.

The two guitars match each other, countering each other's heavy riffs and elevating the song, instead of just copying one another. The drums have the right amount of violence to keep the audience rocking out; while still being controlled enough contribute to the architecture of the whole tune, rather than just the foundations.

The band gave an exuberant performance with an unstoppable spirit, really feeling every chord they struck and I look forward to the next time they’re in town.