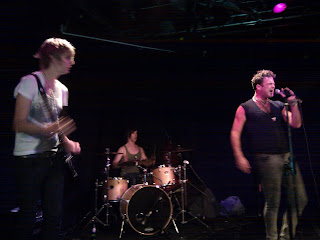 The heat in The Bongo Club plus the camouflage netting on the ceiling make the venue seem like a tropical jungle, which means when The Nature Boys (pictured) take to the stage dressed like The Lost Boys from Peter Pan, it seems apt.

Drums are provided by local super-producer Andy Howden, who keeps it heavy on the toms, adding to the jungle motif, and drawing on Adam and the Ants-style glam rock. Guitar is at times sparse, opening up the songs to the deep-rooted low-end created by booming drums and pulse rhythm bass, reminiscent of Isa and the Filthy Tongues.

There’s definitely some Sex Pistols-era punk happening in The Nature Boys sound too, and lead singer and true performer Cammy Shiels feeds the crowd his energy as they feed him their applause, in a self-perpetuating musical eco-system. Shiels’ antics include taking a lap around the crowd at the beginning of the set, getting his hairy chest out, and diving into the crowd to sing in the middle of the room during distorted guitar rock-out ‘One Way Out’, where he got The OK Social Club singer Raff to join him on vocals for the chorus (“He always does that!” comments Raff later, both irritated and flattered).

The Edinburgh-based quartet are launching their ‘Pretty’ EP tonight. The CD, for sale in the lobby, includes a sub-metropolitan take on mythology in ‘Valhalla’, the raw art-punk of ‘You’re So Pretty’, the Art Brut-style sing-speak and one chord progression repetition of ‘Upside down Sinner’, and the football match sing-along ‘Age is a Number’.

The band end their set with fan favourite ‘Girl of the Night’, where they invite all the animals of the jungle on stage with them, to “start a f***ing riot” and turn the chorus into a cacophonic mass sing-along.
Posted by edRock.net at 15:23