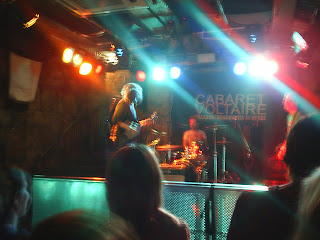 The underground caverns of Cabaret Voltaire can be whatever you want them to be. To some bands the venue is a gallery, and to others an amphitheatre. To some it is a dungeon and to others it is a refuge. After eleven, it is the pulsating heart of Edinburgh’s electro club scene. Support act Hagana’s (photo on right) set had an intimate environment, as the room was packed with friends and fans of the band alike, all along to show their support. The band look at home on the stage, loosening up in a way they haven’t often done before, showing more potential still to be tapped. 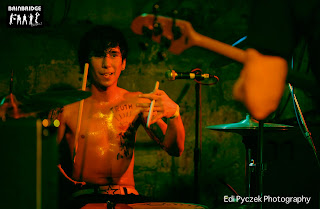 By contrast, headliner The Fire and I’s (photo on left by Edi Pyczek) set is the well-polished, confident presentation of rigour and near-palpable performance experience, and the crowd greets them like the rock stars they are. The gig marks the end of the band’s tour in support of their fantastic debut album, Stampede Finale, and the effective homecoming for the Bathgate-via-Mexico City energetic alternative rock duo, who have been touring not just Scotland, but Italy too. It will also be the last gig the band perform for at least a couple of months, as the band take time off to write some new songs, and work on a side-project; more on that to follow.

The other big reason for the animation of the gathered audience is the first live performance and unveiling of Hagana’s secret new bassist, which edRock.net can now reveal is Death Trap City drummer Michael Field (photo on right by Edi Pyczek). 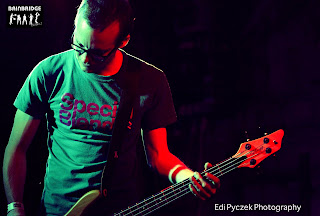 “There was a couple of interesting moments when I was loud as hell when I shouldn’t have been,” Field confessed after the show, “but that’s cool, it’s a learning process.”

As a drummer, Field was impressed by The Fire and I. “Their drummer’s cool. All of his stick tricks are ace! Proper out of the hand stick tricks that’re ridiculous! I don’t have the balls to throw any of those down on stage.” As a bassist, Field feels he’s just a newbie. “Having to stand up and not having anything to hide behind is f***ing terrifying. Proper terrifying.”

Hagana’s lead singer and guitarist, Leo Fox (left), was overjoyed with the performance. “Our new bass player done fantastic, he only had one practise with us, and he fitted like a glove, basically. He done fantastic.” Drummer 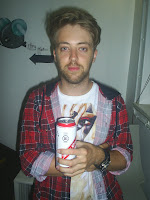 David Chisholm (right) agrees. “Good considering I came back from Asia on Wednesday night and we had one practice on Thursday night and then the gig on Friday night. It was good all three of us having fun on stage, which I think has been missing the last couple of months. Obviously we miss our old bass player; he’s been with us for so long, but I think all three of us could use a fresh band, I think we’ve got a nice but of fun and enthusiasm to the band that was missing before.”

Fox also mentioned he was happy to see The Fire and I play again: “They’re old gigging chums of ours, we’ve gigged with them many times, great showmen, and I think they’ll go on to great things.”

“Didn’t really watch much of The Fire and I if I’m honest,” Robson admitted. Immediately regretting it, he added. “Please don’t put this quote on your website, because I do actually think they’re awesome but I was otherwise occupied talking to people and things like that.”

Who could he have been talking to? Perhaps a very drunk Matthew Bakewell

(right), lead singer of A Fight You Can’t Win, after whom Hagana have named a song in their set. “I think that Hagana’s bass player is a cross between the one fellah from Soundgarden and Gary Glitter,” Bakewell stated. “Which is, in my opinion, the best thing that ever happened. I think that he is both an excellent bass player but clearly fiddles kids.” Presumably, this is an endorsement from Bakewell, who is referred to affectionately by his friends as ‘Edinburgh’s favourite sex pest’. He went on to describe similar affections for The Fire and I: “I initially wasn’t entirely sure but actually they are the s***. Really, really good, and I want to f*** both of them in the ass, hard.” Hmmm. 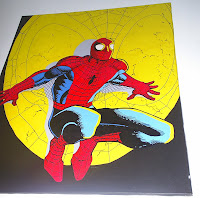 The aftershow party is less than a minute’s walk away. Down Blair Street, across the Cowgate, up the alleyway stairs towards Guthrie Street you’ll find The Store. The VIP room upstairs is complete with low-sitting couches, a pool table, full service bar and Golden Age comic book artwork of Wolverine and Spider-Man (left) adorning the walls. Not to mention banging tracks and more faces from the Edinburgh alternative scene.

Such as lead singer of Scrap Brain, Angie Clarke 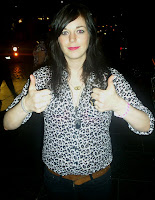 (right). On the subject of Hagana, she exclaimed: “Loved them! It was really much more energy and stuff, I really liked it.” Then, as the token girl, Angie offered some beauty tips: “The Fire and I were good as usual... lots of energy, very sweaty, and what’s his name? Gordon? Very good, however, needs to work on his hair as it looks like a wig on back-to-front.” 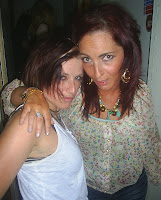 (right of photo on left) disagrees, “They’re tidy! The two of them are quite tidy. Good looking, aye,” she proclaims wistfully. Scene darling Martina Cannon is a regular sight at alternative gigs in Edinburgh and can be seen here as part of A Fight You Can’t Win’s stage invasion. She was impressed with Field’s debut appearance as well. “He was s*** hot, he moves like a panther. And there’s going to be a lot more of that, I can imagine, in the next couple of gigs.”

(right of photo on right) description. “I quite like the way that his head still moves the same way when he’s playing bass as when he’s playing drums. Just a little bit of leg action on top so what more do you want?” “Jumpy-aroundy,” Chris Elsheikhi (left of photo on right) adds. Chris and Angus run Bainbridge Music, and they put tonight’s gig together. They were very pleased with their headliner’s performance. “Brilliant, really, really good. Energetic, in a word,” Chris says succinctly. “Well, what did everybody else think of The Fire and I?” Angus asks rhetorically. “You heard the crowd, you’ve got it on record, they were unbelievable... even the monitor mix sounded amazing”.

(left), ever-smiling drummer of The Fire and I, strolls into the afterparty fashionably late with a grin even wider than usual. “Today it went like a Super Pot Noodle when you’re hungry; so, really good. Of course it’s good to be back, I miss all the passionate fans. Although, they’re passionate over there as well.” By “over there” he means Italy, where the band have been away on a manager-free, entourage-free, girlfriend-free two-person tour. So used to being joined at the hip to his bandmate, Sadikson found the idea of a new member in Hagana a little hard to digest. “He must have been the real bassist originally. Surely he did not learn all those songs in one day. That’s f***ing crazy. I love him!”

The night gets later, and people either go home or get drunker. The other half of The Fire and I, bassist/singer Gordon Love

(right), is a lot more timid and patient than the screaming rocker we see on stage, and he is looking forward to the future. “We are going to be writing a lot, we have been writing a lot, and we’re going to write some more and do a lot of demos and work on the next album, which is going to be, hopefully, out next year.”

“Just now we are taking a wee break from gigs for the next couple of months. We’ve got a side project happening. Me and Hooligan are both involved in it.” Interesting, tell us more. “It’s a quite established band but I can’t tell you the name just yet as we’re not allowed to announce it. You’ll probably hear next week.” So what can you tell us? “It’s a band that already exists and we’re kinda mixing things about and getting two drummers and I’m now going to be the bass player and the bass player is going to play guitar. So we’re looking for a bigger sound and it’s exciting, I’m f***ing excited, I want to tell you who it is but I cannae.”

Well edRock.net won’t keep you in suspense. It was announced five days later that Love and Sadikson of The Fire and I were joining Sucioperro onstage at both T in the Park and the 2000 Trees Festival.