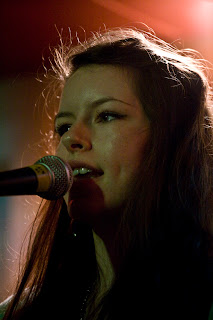 Lets start with the venue. Electric Circus is Edinburgh's newest live music venue. It hides under North Bridge, occupying the space left by the closure of the nightclub Massa. A far better use of the facility, I'm sure you'll all agree. Better still, the live music is being organised by Solen Collet of Cabaret Voltaire renown, and even in its infancy the venue has seen some great names already (FOUND, LoveFoxxx from CSS, Jesus H. Foxx, The Vivians to name a few).

On this particular night the first performer was solo act Carrie MacDonald (photo by Leith FM). Carrie is a singer and acoustic guitarist. Although she has a distinctly Scottish name, her voice is rich with far more multi-cultural influence. While the tunes still have Scottish folk ground level, she covers love songs and ballads, r'n'b and funk, and imaginative pop without stretching too thin. Indeed there's times when you're expecting a American rapper to join in for the midsection, or a blast of brass horns over the chorus.

While Carrie was complaining that her performance would be stunted by some heavy drinking the previous night (see, told you she was Scottish), her voice didn't crack once as the higher notes were hit strongly and powerfully. The only casualty was a cover song she had planned, which she had to give up on, in favour of a song by Lady Gaga that was easier to play.

It may also be worthwhile mentioning that there are a rack of TVs behind the stage at Electric Circus. This night it was showing the 60s psychedelic pornographic french film Girl on a Motorcycle

, with something wrong with the feed making all of the pictures look... sort of blue. So when the first two members of Chutes came on stage to perform a beautiful acoustic song the eye of the crowd was somewhat drawn to, as the band would later describe it themselves "Marianne Faithfull getting pumped".

The feel of Chutes songs, when the full five piece take the stage, is untarnished by the transition from electric to acoustic. They still produce the feeling of metropolitan expanse and the themes of troublesome relationships. They're still reminiscent of REM, Interpol and Joy Division. The use of brushed drums, acoustic guitar, and sometimes even mandolin doesn't lose any of the magic, it just presents it in a different way. The bass is entirely unaffected as the player switches between electric bass, slimline electric double bass and MicroKorg: presumably this instrument change is to make the basslines easier to play as all three instruments seem to produce the same warm, rounded deep sound.

While the lead guitarist proved he has a gorgeous voice in the opening section of the set, seeing the the full band play shows the need for their lead singer. His everyman voice and very believable delivery is great for portraying the claustrophobic atmosphere of the segment of the human condition they've chosen to explore with their dark indie, and while the band aren't likely to cause you to smile and hold hands, shed a tear or mosh furiously, they have are the experts when it comes to songs about small pleasures, disappointing conclusions and irritation.