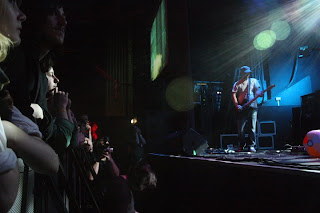 The All Tomorrow's Parties film is a collection of found footage. Hence there isn't really a director. Some of the footage comes from recordings of the bands playing live. Some is backstage footage taken by the performers themselves. A lot of it is taken by fans on handy-cams or camera phones. A small minority is even footage of Butlins or Minehead from back in the fifties. The video floats from band to band, including Grinderman, Mogwai, Yeah Yeah Yeahs, Daniel Johnston and, bizarrely, comedian David Cross (who goes on a quest to confront his heckler) and topic to topic, including guerrilla performances, pool activities, acoustic sing-a-longs.

Due to its nature, a lot of the content clashes in style, or is grainy, badly shot or distorted. This gives you the distinct impression you're watching a video made by some mates on their holiday. But thanks to some great editing, scenes that would otherwise bore you are made more interesting by showing similar scenes simultaneously, like six couples kissing at once in a six way split. Or a guy chasing a duck around on the right of the screen while another guy chases a seagull on the left of the screen. And many of these are shown over the music of a live performance.

The interviews with bands, or with festival captain Barry Hogan, were rather casual, as they were carried out by other band members. Overall, the film gives a real feeling of being at the festival, both as a fan and as a performer. Instead of showing the festival in an artistic, introspective light, or in the sensationalistic, organised way that mainstream festivals are shown, the producers and editors have shown us what the festival is actually like from the point of view of the people that are actually there. Although I guess with only found footage to work with, they didn't have much choice.

After the film, Mogwai

stepped out of the screen and onto the stage. The Scottish instrumental post-rockers curated the very first ATP, and keep coming back to play at the request of other curators, so when ATP announced a "secret Scottish headline act", we already had our suspicions.

The band are a tall, bald, centre stage bassist, capped lead guitarist/noisemaker to his right and another guitarist stage left. At the back of the stage are the big drum kit; and the keyboards, synths and electronic gadgets. Most of the tunes are entirely instrumental, and the few lines of vocals that are there are sung by the keyboardist and heavily processed beyond recognition; it just becomes part of the wall of sound.

Through guitar or bass riffs repeated for 11 minutes, beds of distortion and riding drums, Mogwai explore the boundaries between sound and noise, to the point where you're not sure if the melodies you are hearing are real or imagined; the byproduct of complex cross-modulation. The effect is entrancing, almost hypnotic. It may be difficult to imagine that a group of shoegazers are a great live experience, but the atmosphere of each song engulfed each member of the audience like they had put mood-altering drugs in the water.