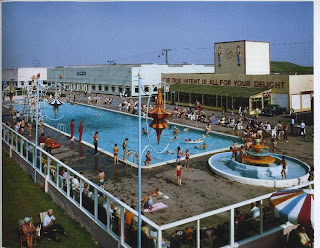 ’ at the Edinburgh International Film Festival this year. ATP is an alternative to the muddy, rock and pop, mainstream festivals. It showcases experimental, avant-garde and underground music and weekend attendees get a chalet with a warm bed and a shower at a Butlins or Pontins holiday camp. The other twist is that each weekend is curated by a well known act, who choose which bands to book, or turn it over to the fans to vote for which bands they want to play.

The documentary, described as “a kaleidoscopic journey into the parallel musical universe of the cult music festival”, will feature bands like Belle And Sebastian, Iggy and the Stooges, Yeah Yeah Yeahs, Sonic Youth, Patti Smith, Grinderman, Seasick Steve, and of course Mogwai, who curated the first event and shaped the musical style of the event. The material comes from over 200 different sources, including filmmakers, fans and musicians.

The film debut, which is rather cheesily titled ‘The Night of Musical Delights’ takes place at Edinburgh’s HMV Picturehouse on 24 June 2009. In addition to the screening, the night will feature a DJ set from Chris Geddes (of Belle and Seb), Northern Soul dancers, bingo (yes, bingo), a “lovely legs” competition, and a musical performance by a still secret headline act.

Tickets for the full show are available from the Edinburgh International Film Festival Box Office.

If you can’t make it to the show, the film will be released on DVD on 21st September 2009. Keep up to date on the film’s website.