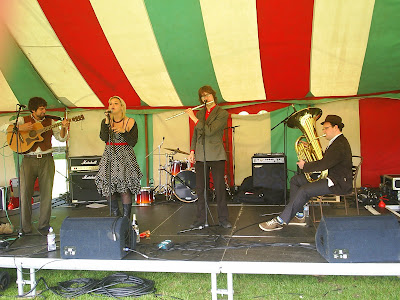 Townhouse are the accompaniment to a sunny day that rains, which, coincidentally, was the weather on Saturday at The Meadows. The band play an acoustic set of funky folk songs, usually with female vocals. The percussion is usually hand drums, giving an earthy undertones to the light and fluffy surface of the music. The overall effect is one of subtle satisfaction. The tune to watch out for is 'Here Come the Vampires', which although lyrically quite different to the rest of their music, is a great refection of the curious musical shadows behind the yellow sunbeam melodies.

The Banana Sessions (pictured) present a different world view. Again, there is acoustic guitar and jaunty female vocals, but this time we're taken on a journey reminiscent to a Disney story of student life and mischievous rabbits. Guitar and vocals are backed by a reserved drum kit, a flirty flute, played particularly expertly, and, intriguingly, a tuba forming the basslines. About two thirds of the way through the set, the small, painted-face children that had been running around the stage area like playful pixies, began to dance to the music. Then the drunks and hippies joined in. Before long, most of the audience had gathered in front of the stage for a boogie. Their set included a Nouvelle Vague

style re-imagining of a Prodigy song, and after some serious chanting from an on-their-feet audience for another tune, the band played a similar upbeat cheery cover of Technohead's 'I Wanna Be a Hippy' as an encore.

What interests me most about the style of music of Jesus H. Foxx is the lack of ego from the non-front band members. While all clearly masters of their respective instruments, who can prove it at the appropriate moment, they only ever play what is needed, so as to slot neatly into the musical jigsaw puzzle, executed to compliment and become part of the soundscape, and never to draw focus. The effect then, is a complete sound, not a collection of parts. Following in the style of The Bees and The Polyphonic Spree, with a full-bodied light-hearted psychedelic pop music. The seven-piece band include many guitars, and also incorporate some xylophone and floor tom among other rotational instruments.

Countering Jesus H.Foxx's many instrumented playful exuberance, is Punch & The Apostles' many-instrumented controlled cacophony. Drawing influences as wide as baroque, Chicago jazz and funk metal, the six-member band have decided that tunefulness and time signatures are useful tools, but far from essential; many of their dramatic songs end with violent dissonance. The route they take there is an adventurous path, and far more high-brow than simply playing some open chords and letting your guitar feedback. A typical Apostles tune will include a quiet, confessional aria, and explosive brass war cry, and a distorted guitar thrash and drum crash. With a lot in common with World/Inferno Friendship Society, this band are not one to accompany afternoon high-tea. But if the apocalypse was nigh, these guys would help you end the world with a bang.