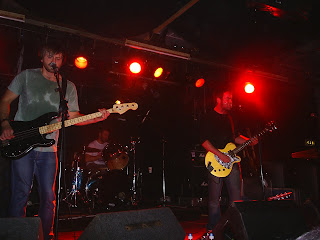 On paper, 1" Volcano have a pretty good style. Hard rock riffs, with some groaning vocals. The bass has a great rattley punk sound, and the guitars go from distorted power chords to shiny picking with relative ease. The band are lacking in two departments though. The first is live performance. Entirely unentertaining to watch, the band barely move as they go from song to song like they're collating spreadsheets, which it isn't too hard to imagine these men doing. The second is originality, the music they produce has been done before by every guitarist who's ever put up an ad on Gumtree saying "lets start a kick ass rock band. I like AC/DC and The Pixies." Also, I'd rather not contemplate the connotations of their band name too long. That being said, the last couple of songs in their set had more of a foot-tapping enjoyability.

There's definitely aggression at the heart of Degrassi's music, taking in two metalheads and a bassist who looks like he plays for Weezer, the band are an odd power trio to look at. In a way, this reflects their music, which is two parts tough-guy power chords, but with a shot of college-radio inventiveness. In performance, however, the band are one voice. Their maturity and togetherness pays tribute to their experience. Their dirty, grungey rock was well executed. The only issue was a lack of catchiness - these weren't really songs to sing along to.

Future of the Left

(pictured) rocked the Studio. The three-piece are two Welshman and a Geordie singer. The guitar and bass are both heavy, deep and distorted, while the drums are tight and rocky. As the set develops, the two frontmen's banter begins to strengthen; starting with some ill-conceived comparisons to Glasgow, and building up to humourous anecdotes and audience participation. For some songs, they replace either the guitar or the bass with a dirty Roland Juno synth. The vocals are screamy, the melodies are good but not too memorable, and the lyrics are difficult to decipher. If the singer could relax his neck muscles a little when singing, they'd be a truly terrific grunge band. As it is, they're falling short of metal due to their limited personnel.

The performance, though, is undeniably brilliant. From the charismatic comedy duo at the front with their crowd interactions and funny accents, through their purposeful riff hammering, they never stoop to egocentric posing. The stand out track is the angular synth-and-bass Manchasm

. During the final song, the bassist joined the crowd, slamming his instrument while pogoing in the mosh pit, then crowd surfing around the room for a while. Meanwhile, onstage, the singer was moving the drummer's kit, one piece at a time, to the front of the stage, while it was still being played. Never a dull moment with these chaps around.