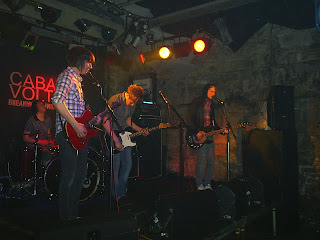 "Good evening, we're Smashing Pumpkins", began Lions.chase.tigers, in tribute to the backing track playing before the band. The dry humour is unsurprising from a band whose foremost instrument is swooping sentimentality. The standard two guitar quartet are from the Snow Patrol school of songwriting. Pulse rhythms and teensy indie riffs that build up, with lots of reverbs and whaling cries of passionate emotion. The lyrics sometimes crossover into emo, but the Scottish accent keeps it sounding heartfelt. The band have a strong presence without indulging in showmanship, and a tightness that keeps "epic" from becoming "shambolic".

With a little less seriousness and a lot more overdrive, cheeky four-piece The Void (pictured) play overdriven power chord alt-rock. With elements of emo and pop-punk, not least of which are the hoodies and faded jeans they sport, the band have a good humour and a loving fan base. Employing vocal harmonies, and a start/stop, staccato/legato, jagged/flowing juxtaposition to their angsty music and lyrics, their tone is more intelligent and more danceable than their genre would have you believe. The highlight of the set is the heavy rocking 'Reunion'.

Over The Wall follow a much rarer template.... In fact I’m not sure they’re following a template at all. The guitar and keyboard two-piece break the mould. Unlike most bands that employ a laptop for bass and drums, the moustachioed Glaswegian duo play delicate indie-folk, a genre that Scots continue to dominate. The keyboard, which is usually set to glockenspiel mode or similar, plinks in accompaniment to the rich guitar plucking of the lead singer. Occasionally they also bring out a harmonica or a trumpet. The laptop is really there to fill in the gaps, and isn’t even always needed. Bands missing live drums often have a hard time winning over an audience, but the sweetness and ease of listening of Over The Wall's songs keeps them accessible and puts a smile on your face.

The final band, Cryoverbillionaires, bring the night to a disappointing anti-climax. Failing to bring the catchiness and excitement of their recordings to their live set, the Edinburgh lads strum their gentle rock without too much confidence or personality. The songs got better as the set went on, each one getting catchier and more fun, they were able to turn their seeming lack of focus into more of a deliberate psychedelic aura that hovered around some exciting drum parts and moany-child lead vocals. One assumes they were just having an off-night, but Cryoverbillionaires do need some better songs and rethink of their delivery.