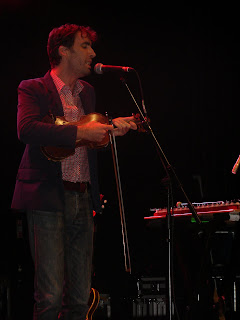 , former singer of The Delgados brought her particular brand of mellow indie rock to the HMV Picturehouse to a rather more adult, scattered crowd compared to the last night's performance from Amanda F***ing Palmer. Since her band's 2005 split she's only released one solo album. Nonetheless her set was fairly free of her ex-band's material. Backed by a full band and playing her guitar in a 60s dress, Emma Pollock's music is slightly plain and gets close to but never quite reaches the levels of her former band. The melodies just aren't strong enough and the backing just isn't interesting enough. Regardless, though, she has a strong following amongst the crowd and they were delighted to hear the music well executed with an element of grace.

(pictured) has appeared on stage with a group of backing musicians to cover all the nuances of his rather complex string and guitar arrangements. On this occasion however, he appeared on his own, with an array of amps and, the arrangement-happy solo artist's best friend, a loop pedal. The tunes built up quite quickly. There are actually quite a lot of different sounds you can make on a violin: bowing, picking, strumming it like a guitar, using distortion, using an octave pedal. The large set of amps meant the little violin could cover a massive range of frequencies, but the coolest trick was when he hit a pedal that started two large gramophone speakers pointing opposite directions to start spinning at smoothie-blender speeds, twisting the sound they produced with the Doppler Effect. Actually, this was the only point in his set when he required another person on stage, as a wee roadie would come on after these songs to reset the spinning speakers.

The music tended to be middle-beat hipster tunes reminiscent of Belle and Sebastian or Simon and Garfunkel, and involved a lot of whistling. Andrew also had a dry sense of humour and a good rapport with the crowd. Watching him build his songs using nothing more than the littlest string instrument and some invisible device from some meaningless clicks to a tapestry of different sounds was entrancing and the audience stood perfectly still, mystified. They clapped loudly, then waited patiently for the next song: a performer’s dream crowd. Hard to say whether this was the effect of his performance, or merely the sort of people he attracts with his music. He did, however, take one request from the audience: to play a comedic song where he makes the violin sound like a mandolin, a lute, a guitar, etc. that he allegedly barely remembers.

Also, he had a glockenspiel on stage that he never played. What's that all about