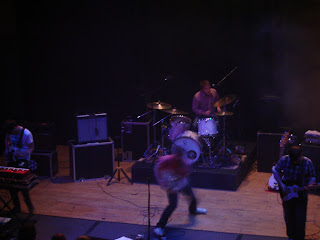 ; heralded by the scene as our current champions. Their sound was banjo and accordion type über-acoustic sounds mixed with electronic warmth and noise and backing tracks, as is the current Fence-collective inspired fashion in Scottish indie-folk. The large band, heralded though they are, failed to live up to their hype, not to mention to the status expected of a Queens Hall support act. With no banter, no personality, and a flavour of music that, in the pre-Arcade Fire landscape, may have been original and interesting, is just one voice in a crowd of similar bands. The vocals squawked somewhat irritatingly, and the well-placed (and well-played) cello was underused in favour of electronic bass sounds.

have been off touring the States, and you really did feel their genuine joy from being back in the Capitol. It was like they were at a party with old friends they haven't seen in a long time. In some ways, this was true, Edinburgh was really glad to have them back. Opening with 'The Modern Leper', a tale of drunken fights on (presumably) Glaswegian streets, the band performed with an excitement through their epic indie ballads and Selkirk voiced knees up folk rock. Although the majority of their set was drawn from breakthough album 'Midnight Organ Fight', lead singer Scott Hutchison asked nicely if they could play some new tunes. It’s clear these songs are no longer being written with the intent of being played by Scott and his acoustic in a crowded pub, but to be performed by a full electric band rocking out on a large stage. Many of the songs went entirely without bass, with up to three delayed guitars chiming in sync. Others used modestly electronic keyboards.

The band also welcomed to the stage their guest accompaning guitarist; Ross Clark, of Ross Clark and The Scarves Go Missing. Who, incidently, are now going with the name Three Blind Wolves. Presumably to make it less of a solo act and more of a band. Perhaps Ross is getting shy of all the attention.

A highlight of the show was 'Backwards Walk', where the digital drums of the recorded version were replaced with the standard kit, splashing and snaring contently, which echoed noisily around the concert hall spelling out the words “live version” in capital letters.

For the encore Scott came onto stage with an unamplified acoustic, ignored the microphone, and yelled to the audience he wanted to try something he hadn’t done in a while. The entire audience joined in for a campfire-style rendition of ‘Poke’. Most of the audience, especially down the front, seemed to know all the words so he just let them sing most of it. It was hauntingly magic hearing thousands of Scots whisper the high-pitched “ooohs” in the chorus.