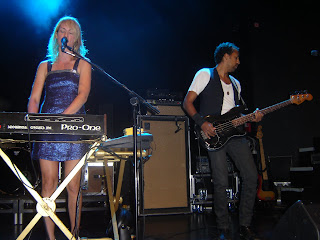 are a glitzy band of the electro-rock persuasion, hailing from Toronto, Canada. While Canada for most people, conjures thoughts of Bryan Adams, Avril Lavigne and Nickelback, those familiar with the Broken Social Scene, of which singer Emily Haines and lead guitarist James Shaw are active members, will be less surprised to find Metric as a product the maple leaf nation.

And of course, the always-classic mood killer "Who has work in the morning?” Thanks for that reminder, Haines!!

Some highlights of the set were 'Dead Disco', a song which can only unleash its true potential live, so you can hear that guitar punch, the bass buzz and the snare snap. 'Stadium Love', a celebration of noise where Emily lists a bizarre animal battles ("spider vs bat", "owl vs dove"), and 'Help I'm Alive', the lead single from their most recent album, which mixes a slow groove and a guitar pulse with an art-pop melody.