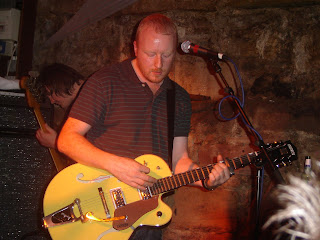 Article originally published by, and property of The Daily Record:

, a catchy ode to his favourite pair of foot warmers. From a lyrical point of view, Malcolm hasn’t strayed too far from his previous band, Arab Strap. His songs mostly deal with dreary mundane reality, in a deep and murky voice. His music tends to play simple melodies over a drone on one of the instruments. The effect is comparable to bagpipe music, a comparison made more apt by the quintessential Scottishness of Malcolm’s casual self-deprecation and ‘f*** it’ attitude. As part of his backing band, lead guitar and fiddle came from a red haired girl named Jenny, who also sang vocals, her well-rounded voice accenting Malcolm’s choruses like a bright red highlighter pen.

After playing a rather slow and anti-climactic last song, in which he forgot the words at least once, Malcolm announced that he had got the set list wrong and that was a terrible song to end on. To make up for it they played a surprisingly rousing cover of Bryan Adams’ ‘Run to You’. Malcolm claimed Jenny had posters of Bryan on her wall. She denied the accusation.