Its Friday 4 Sept 2009, Edinburgh is celebrating getting their city back from the tourists and production companies over the fest with a good Friday night out. The acoustic show will take in solo performances from some of the Edinburgh music scene's glitterati. edRock.net caught up with the performers backstage at Electric Circus (or more accurately the little room beside the stage) to ask them about their sets tonight, their experiences of The Edge festival, and what lies ahead. 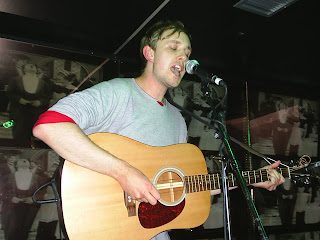 The Edge: Chutes didn't take part in the Edge festival this year, they've been too busy recording their album. Its about half done at the moment. Its not necessarily what you might expect from seeing their live performance, and includes some new arrangements: including strings and acoustic guitars.

The Electric Cabaret Show: Danny played some Chutes songs, and some that are just his own, backed up by bandmate Adam on upright bass and Rory from Broken Records on violin and mini-accordion. With two guitarists already in his band, Danny enjoys the opportunity to play as well as sing.

As a Solo Artist: With Chutes, songwriting is a collaborative project. On his own, Danny gets to play some songs that he has written just on his own. Having been stuck in the sometimes frustrating and labourious process of recording an album, Chutes haven't been gigging much recently. His solo songwriting is a good release. He can play what he wants, make up lyrics on the spot, its much more free and personally expressive.

On the Horizon: Apart from the new album in production, Danny would like to big up The Depot, a rehearsal and recording studio down in Granton run by his bandmates Craig and Stu. 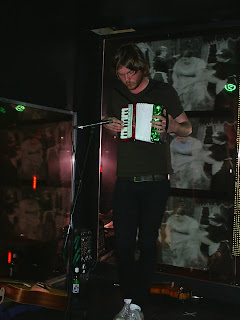 The Edge: Broken Records were worried that all their fanbase would be going to the Frightened Rabbit gig, a day later at Queens Hall too, and so wouldn't bother with their gig. It was also their first Edinburgh show in about six months. But the turn-out was excellent and the show was fantastic.

Accompanying Danny Chutes: Broken Records and Chutes have known each other a long time. Being part of the Edinburgh indie music scene, they've played a lot of gigs together, have gone touring together, and have become friends. Danny and Rory first met at the Christmas Songwriters Club. A group of around 7 songwriters get together and play four songs, often of a Christmas theme, to each other around the 22nd of December.

On the Horizon: From September through to Christmas, Broken Records are going on our a British and European tour with fellow Edinburgh band We See Lights. After that, they'll be working on their second album. 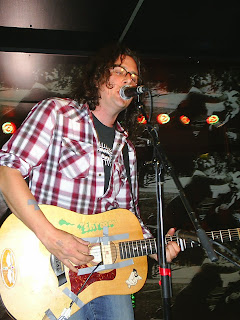 The Edge: Dan, the off-stage name of performer Withered Hand, supported Jeffrey Lewis at The Edge this year, and his band Jeffrey Lewis and the Junkyard. The other support act was Jeffrey's brother's band 'Jack Lewis and the Fisherman Three'. Dan is a big fan of both Jeffrey and Jack, and was happy to be supporting them once again. He says its weird playing with someone you really admire, but is happy he's becoming Jeffrey's go-to support act for Scottish gigs.

The Electric Cabaret Show: Unlike the other acts playing, Withered Hand is used to taking to the stage as a solo artist. His set was standard and unaltered.

As a Solo Artist: Although Withered Hand is essentially a solo act, Dan often takes to the stage with a backing band, made up of some of his friends, including Neil from Meursault. His band play banjo, cello, drums or accordion, whatever best accompanies each song. 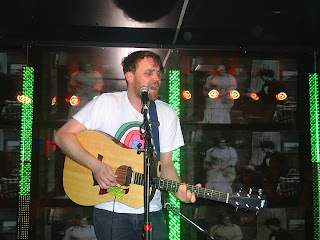 The Edge: Having a headline show at The Edge festival was something Frightened Rabbit really enjoyed. Now a worldwide band, they play Scotland a lot less often, and so the gig was like a homecoming for them.

The Electric Cabaret Show: Scott played a mixture of classic Frightened Rabbit tunes, to please the crowd, and some new songs. The new songs have already been recorded for the new album, but some of them had never been performed in front of an audience, and this was a chance to see how they go down.

As a Solo Artist: While Scott has done solo shows before, he's now far more used to taking to the stage with his full band. But the band have been working on their new album over the Summer. Scott admires the work ethic of bands like The Hold Steady and Belle and Sebastian, who tour relentlessly and record albums whenever they get a spare chance. Scott reckons recording should be a joy, not a chore.

On the Horizon: The new Frightened Rabbit album is out in March 2010. The as yet untitled LP was recorded at Castle Sound in Pencaitland, East Lothian with producer Peter Katis, who's previously worked with The National and Interpol.

The full band are also back in Edinburgh on the 21st of October for 'Music Like A Vitamin' at HMV Picture House with Attic Lights, and a solo performance from Rod Jones of Idlewild and Teenage Fanclub, in support of a Scottish mental health charity. Tickets are a mere fiver.