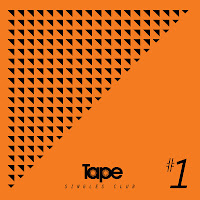 Edinburgh's Tape Studio have worked with acts like Amanda Palmer and have two Studer tape machines to make your inner audiophile's mouth water. They've also recently unveiled their new Singles Club. The concept for the Club is simply intermittent releases of split 7" vinyl singles featuring two local artists that Tape have worked with previously. The idea itself had enough potential to attract our attention, but the pairing of Dead Boy Robotics and The Machine Room is a match made in heaven for lovers of electronica-tinged indie.

Dead Boy Robotics are first up with Ever, taken from their upcoming debut album (which was recorded at Edinburgh's other great treasure trove of analogue equipment, Chamber Studios, then mixed at Tape). DBR have been plugging away for quite some time, with a slot at T in the Park in 2009, a well-received debut EP in 2010, and the album to be delivered later this year, their dark synthesis of electronic loops and guitars becoming more and more defined over time. 'Ever' is a promising glimpse at the upcoming record, strongly evoking Pure Reason Revolution's most recent material with its overlapping vocals and deep synth textures enveloping the solid core of gritty bass and percussion. The song benefits from a fairly unusual structure that stops and starts where lesser songwriters would just keep powering away. 'Ever' is a dense piece of work, at 5 minutes in length and with a deliciously dark character that makes it an unusual choice for a single in some ways, but a great song in its own right. The album it serves as a preview for can only be just as good, and we look forward to hearing it.

The Machine Room, unlike DBR, are newcomers to the Edinburgh scene. They seem to have done pretty well so far in garnering some buzz, and attracted enough attention whilst recording their debut EP at Tape to be included in the Singles Club. Their track, Girly, certainly comes from the brighter, more "indie" shade of the spectrum, especially when compared to 'Ever'. Glittery electronics twinkle over a fairly catchy, delicate vocal line, and the whole thing is quite... well, girly. It definitely feels like more of a "single" than its counterpart, but does a lot less to grab you by the head. That's not to say it is a bad song, however; the production is punchy and the vocals sit at a perfect, inoffensive level, letting the sound fill up during the choruses for an admittedly quite powerful effect, particularly towards the end of the track. The Machine Room do sound like they would be great fun to watch live, and fair play to them to at least hold their own when back to back against Dead Boy Robotics, a unit that has been together longer and been able to really hone a sound of its own. Ultimately, 'Ever' stands out considerably as the better song of the two.

Stewart McLachlan
Posted by edRock.net at 15:09