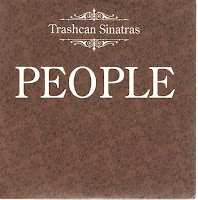 , the third single off of their 2009 album In The Music. A melancholy synth-glum Echo and the Bunnyman-influenced verse is followed by a major key love song response with a rich vocal harmony for the chorus refrain “People, people will fall in love”. It’s the sort of chorus where people join hands and sway. There’s a heart-warming understatedness to the single, which makes it easy to listen to but at the same time somewhat mundane and hollow in sentiment. However, the song progresses nicely and the instrumentation is expertly arranged; it’s a tough song to dislike.