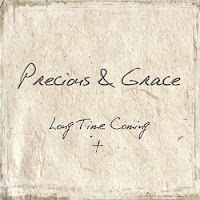 Precious & Grace are something of an oddity amongst Edinburgh's younger bands. Their approach to pop-infused rock music with big choruses doesn't subscribe to "the current sound" in the way similarly aged Scottish guitar bands do, with a distinctly American slant that has been more or less constant since their inception years ago, despite this EP being their first major release.

Curiously, with Long Time Coming the band are drawing from their newest material, despite having amassed a considerable repertoire over time. It weighs in at a lean 12 minutes, and of its three tracks, two are brand new ones that few had heard prior to their release, certainly a bold creative decision.


Opener All America Long more or less summarizes the record- a big chorus with big echoing guitars, well-placed harmonies and twinkles of piano. It's an interestingly meticulous pop song, with various melodic and rhythmic twists that work really well. The band's songwriting is the most prevalent strong point of the EP- it's refreshing when young musicians punch above their weight, and unashamedly aim for the classic rock highs a lot of their peers would be too nervous to even dream of. And for the most part, it works well.

Generally speaking, this EP is a commendably mature and self-confident work that stands on its own two feet, regardless of the age of the musicians that crafted it. The hallmarks of a young band still trying to find their feet are visible throughout, however, with all manner of devices being experimented with underneath the unifying musical palette. From shameless wah guitar solos to gang chants, it feels as though Precious & Grace still aren't 100% sure exactly what they want to be. However, the musical output speaks for itself, and as a solid release and indicator of future potential, Long Time Coming is a successful debut.


Stewart McLachlan
Posted by edRock.net at 11:35