High Five is a brand new feature where edRock.net gives a "high five" to people we think are doing an awesome job at promoting great Edinburgh music, by asking them to share their top five tunes by local artists, and why they love them. 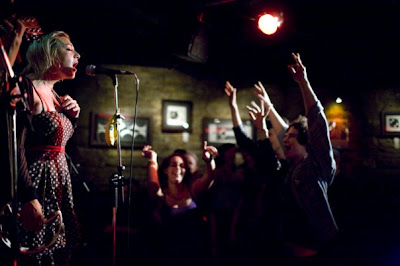 Smashing the proverbial bottle on the proverbial bow of this feature's maiden voyage is Roberta Pia (aka Roberta Banana). Roberta (pictured) is frontwoman and co-songwriter of "Acid Skiffle" quintet The Banana Sessions, and is the organiser and promoter of musical showcases Unpeeled at The Jazz Bar. In her role as in-house "Dog Evangelist" (marketing?) for musical instrument shop Red Dog Music, she's launched and now edits The Dog magazine, The Red Dog Blog, and has organised regular live events including Hair of the Dog Sundays and The Dog Show. Most recently, Roberta has joined three-part harmony vocal outfit The Bevvy Sisters. Here she gives us her High Five:

1. William Douglas and the Wheel – Sunshine
Sunshine is one of these tunes that can bring a whole room together. What I like most about it is its simplicity; one verse, one bridge and one chorus. And repeat. And repeat again, if you feel like it. To hear a recording of this song doesn’t really do it justice; it needs to be heard live and with a bunch of people singing along with it. The lyrics are perfect because they encapsulate a moment that everybody can relate to - that moment where you take a look around you and realise that everything is ace and you’re exactly where you want to be. Maybe you’re stoned. Maybe you’re not. Take it literally, take it metaphorically, take it whatever way you like; it’s a tune that, by the last chorus, everyone will be singing along with a massive grin on their face. And I mean everyone.

2. Super Adventure Club – Tommy Sheridan
I love everything about Super Adventure Club, and I think this song says everything that you need to know about them, especially when you see then perform it live. I’ve no idea what most of the lyrics are, but when I do happen to catch them, they come and give me a proverbial punch in the chop. I think what’s amazing about SAC is that they’re mental, and their music is mental, and when you watch people’s faces as they watch SAC live, they almost have a look of wild bewilderment; widened eyes infused with a crazed smile. This tune is hilarious and manic and totally rockin’ and I’m pretty sure, this one time, I saw somebody’s face melt off somewhere around the 1 minute 50 second mark.

3. Austen George – On My Way
I watched two grown heterosexual men fall in love with Austen George once during one of his live shows. Funnily enough, it happened while he was singing this song. On My Way is probably the most heart-melting song I’ve ever heard. It’s a combination of a fantastic chord structure, a hypnotizing melody, a beautiful voice and lyrics that will tug at even the thickest of heart-strings. Honestly, I could say the same thing about every single one of Austen’s songs. You can hear bits of The Beatles in all of them (right up my cuppa tea) but with the magical Austen George touch deeply embedded. I said it once, I’ll say it again, and I’d even say it again after that - he’s magic. Go see him live and I challenge your legs not to turn to jelly. In fact, I dare you.

4. Donna Maciocia - The Nothing & The Numb
The first time I heard this song, it totally floored me. I must have listened to it hundreds of times now and it still has exactly the same effect. I've watched rooms of people go completely silent to this song. I even saw a standing ovation for it once; it's THAT good. I've never heard another piece of music like it before and to see it live is pure mind-blowing. It's the vulnerability of the lyrics that draws you in at first and then, once its lured you in, it begins to soak you in really beautiful harmonies and it layers and layers and it layers and suddenly you'll find yourself completely overwhelmed by how powerful it is. It's pretty loop pedal reliant so you really have to see it in action to "feel the full effect of this" Moochacha classic but I can almost promise you that by the end, you'll be totally speechless and probably in need of a big cuddle. What a tune.

5. Stanley Odd – Broken Has Morning
Stanley Odd’s newest EP The Day I Went Deaf is probably the best record I’ve heard this year. The beats seem to be getting heavier as time goes by, which, in my book, is nothing but a good thing (what can I say, I was raised musically on The Fugees and The Prodigy). My personal stand-out track on this EP is Broken Has Morning - the moment I heard this tune, I fell head over heels in love with it. It’s beautiful and pure filth in equal measures (and by pure filth, I mean pure bangin’). It makes me want to throw shapes on the dancefloor at the same time as sit back, relax and get high, so high. It’s the last 52 seconds that get me the most... I find the mix of the thumping, crackly beats and the ascending, heavenly chords a little overwhelming. One word: goosebumps.