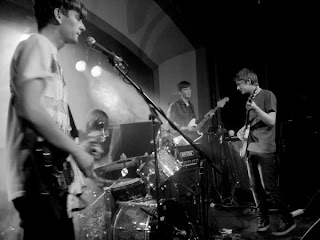 It’s not very often that you go to a rock gig and have to cram closer to the stage to hear the band playing. But solo artist Debutant’s music is just that quiet. The picked guitar is bathed in effects: chorus, reverb, delay, slow attack, all designed to create a soft, glowing, otherworldly presence. The vocals are few and far between, and incomprehensible as they are also drenched in reverb. Despite the low volume, everyone is transfixed on the solo artist. You could hear a pin-drop.

; utilising less effects and a little more folkiness, and of course the biggest difference from Debutant, a second member of the band playing a thundering double bass. However, eagleowl failed to capture the audience’s ear in the same way and the bar is quickly filled with babbling chatter.

(pictured) are guitar-driven indie/rock/pop. The four piece are made up of a drummer with impressively speedy high-hat beats, a Stephen Malkmus sound-a-like singer/guitarist, a lead guitarists who’s riffs and licks like to go for casual strolls on the high strings, and a bassist, who likes to go for casual strolls in audience with his radio lead; although the wireless wonder learns that this is not always a practical party piece when his woolly hat is stolen by a member of the crowd. Keeping the use of overdrive to an impressive minimum, the melody of the lead guitar and the melody of the vocals dance flirtingly and unashamedly atop the rhythm instrument’s sturdy sonic platform.

Although many of their songs are unmemorable, some stand-out tunes near the end of the set get the crowd grooving, such as the penultimate number, rock-out tune 'Pulling Push Ups

', where the bass breakdown and elevating outro part push the song a head above the rest.