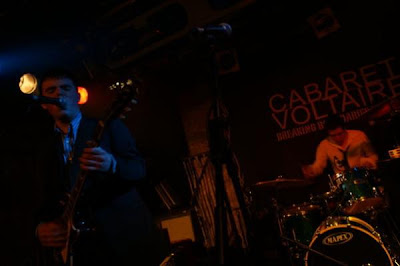 Casino Queen (pictured) make a lot of noise for just two lads, be it Connor Doherty's growling grizzly bear voice, his biting blues guitar, or Stewart McLachlan's juggernaut drum thrashing. Playing dirty delta-blues-rock, the duo verge on what The White Stripes would sound like if Meg was a better drummer. Guitarist Conner plays complex Mississippi style riffs effortlessly, at one point even having an onstage conversation with drummer Stewart while executing a solo, all without missing a note. Stew's rise and fall from subtle accompaniment to crashing explosions add dynamics to his counterpart's strums.

Edinburgh trio Radiokills play rock tunes along the lines of young American bands, drawing on the emotionality of the emo scene to play alternative rock melodies. Where they get interesting, though, is their use of multi-effects boards on both the bass and guitar. The power trio are able to create synthetic but energetic sounds reminiscent of modern progressive indie rock bands like Muse and Radiohead.

The crowd really swelled, though, for the evening's headline act Genetic Radio. The blue-eyed pretty boys are an indie-rock/Britpop four-piece. While they clearly draw a lot of influence from Oasis, as noted by their cover of the Gallagher brothers' 'Falling Down', there's evidence of artists like David Byrne and Edwyn Collins in their remorseful pop rock. This was only magnified by their charming onstage personalities and smiling faces, which the crowd ate up like chocolate drops.