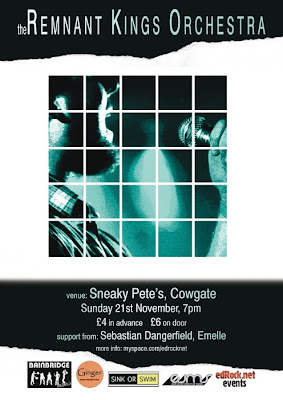 The Remnant Kings are teaming up with a wide variety of musicians to form a make-shift orchestra, including keyboard, tin whistle, violin, percussion, harmonica and trombone.
Despite their drummer, Kit, being away on holiday The Remnant Kings didn’t want to turn down the invitation to perform at the launch night of their management company, Ginger Music Promotions, at Electric Circus in September, and so chose to rework some of their songs into an acoustic set, and invited Garry Hall and Alex Targowski from folk band Gallus, and long-time collaborator Fraser Yuill Scott, formerly of Yuill Scott and The Haight, currently of The Psycho Hearts, to perform with them.
The band were so pleased with the way the songs sounded with the additional instrumentation, that they have decided to take it to the next level, and invite even more musicians to join in on their Sneaky Pete’s headline show on Sun 21st Nov.
The show will include support from Sebastian Dangerfield, who recently supported We Were Promised Jetpacks; and Leith-based gypsy punks Emelle. The night is being promoted by edRock.net Events, and sponsored by Bainbridge Music and Great Junction Street Music Studios. Tickets are available now for £4 from TicketWeb, from The Remnant Kings, or from Great Junction Street Music Studios.
Posted by edRock.net at 08:03