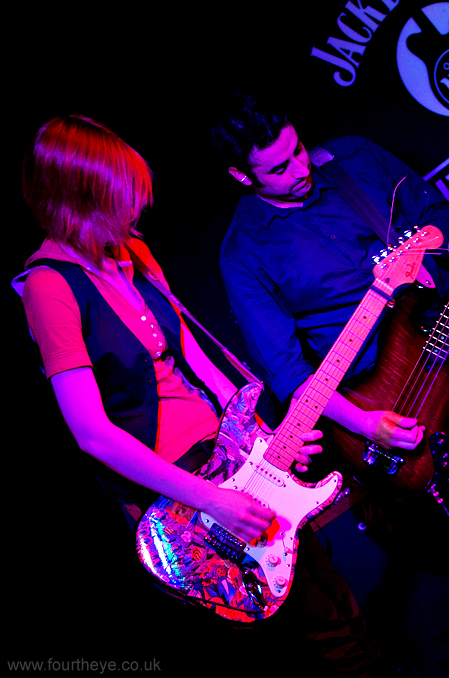 Deep Red Sky combine an indie-rock sound with some all-the-rage synthesiser parts to create a sort of modern pop fusion. The band stepped in at the last minute to replace Bainbridge darlings Underclass, but unfortunately they proved to be an unworthy surrogate. A young band, they have yet to find their own sound, and their songs are uninspiring imitations of whatever’s on the radio. Their cover of MGMT’s Kids manages only to highlight that they are scene-chasing and not doing a good job of it. The lads were far from awful, though, and they performed their uninteresting music with competence and positivity.

Jump: Press A (photo by FourthEye) have a 4:2 ratio of girls to boys. A more sexist person than I might cite this as the reason that the band have rather stylishly all dressed in various costumes consisting only of the colours red and black, and could cite the same reason for the fact that their set is plagued with technical difficulties. However, as an enlightened essayist, I would like to point out that the tech problems were with the bass and acoustic guitar, the two instruments operated by dudes, and the girls were responsible for electric guitar, electric piano, drums, and lead vocals. Between the six of them, the band create a rather full-sized, grand sound, suited to the medium-paced rock epics they perform: a sound that takes influence from glitzy polished post-grunge femme-fronted bands like Garbage and Republica, as well as components of thinking man’s indie like Radiohead or Elbow. Some highlights of the set are singer Kelagh’s Alanis Moriesette-esque melody on ‘You Are’, L-A’s classical piano sound on ‘Only The Brave Deserve The Fair’, and bright red-haired guitarist Lesley’s feisty guitar work throughout the set.

With Underclass out of the picture, the headline slot was awarded to odd pop, scene- veteran five-piece Cancel The Astronauts. Their witty, verging on silly lyrics and vocals put a smile on your face, and their bouncy Vampire Weekendy indie-pop with synthy kinks makes your foot tap. The dual guitars chime and dither through quiet drums that are sometimes relaxed and other times invoke Futurehead-like angles. Compared to the other two bands on the bill, Cancel The Astronauts certainly come across as the elder statesmen (read: they’re older than the other bands) and they have certainly carved their mark in the Scottish scene. So it’s not surprising to see a well-performed and polished performance. Perhaps they’re a little too quirky for the mainstream, but their dysfunction-pop is loveable and something that critics and music fans can get behind.